In Your Eyes Blog Tour

Good Morning!
I am lucky enough to be part of Diana Nixon's blog tour for her upcoming book 'In your Eyes'! You should check this out because it comes out this week, right before Christmas. 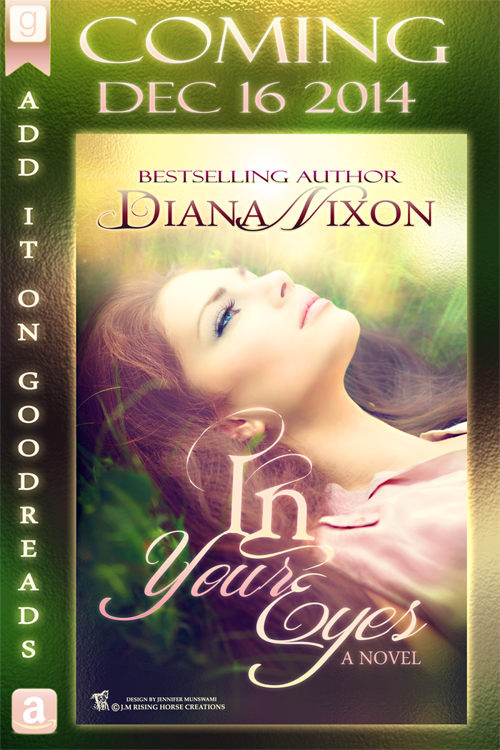 In Your Eyes
by DIANA NIXON
BOOK BLOG TOUR

Book Blurb:
My life has never been perfect. I lost, I lied, I cried. But there was one thing that I thought would stay with me forever — my love…
was my everything. The day he died, I died with him. It was like being caught up in a nightmare, with no reason to keep breathing, with nothing to hold on to.
But one day, everything changed.  I didn’t know I was lost until the moment Nic found me. He made me laugh, he made me feel, he made me believe that I could love again. I thought I would never feel alive, but then I looked into his eyes and I was lost. Only this time, it was not a nightmare swallowing me, but a beautiful dream coming true.
Just when I thought there was no hope for tomorrow, my heart found a reason to beat faster…

Excerpt (Nic’s POV)
Unlike my co-workers, I never knew the lack of money, at least until the moment I thought I wanted to change everything about my life. I didn’t tell anyone about what had happened before I realized that I could no longer live the life that I used to have before coming to Daniel’s workshop. First, because I didn’t want to talk about it, and second, because I didn’t feel like going back to something that I swore I would never return to. No matter how much I had to work, now I was sure that I would be able to take care of myself better than ever.
And then, something unexpected happened…
I saw Emily, even before she turned to see me. She was wearing one of the sexiest leather riding outfits that I had ever seen, and I had seen a lot. It consisted of a pair of black trousers and a jacket, both covering her curves like a glove. Her dark-brown hair was in a perfect mess, if I can even call it that. She was holding a helmet in her hands, and I could only imagine her perfectly-shaped body riding a bike. I would probably kill for a chance to see it, or take her for a ride with me.
The moment I bent down to kiss her on the cheek, the smell of her perfume filled my nostrils. I inhaled deeply, letting that mind-blowing combination of cherry and spice swallow me whole.
She froze. I could feel it even without looking at her. Was it the first time that a guy had kissed her on the cheek? Hardly. With the body and lips like hers, I bet guys never stopped at friendly kisses with her.
Then I looked at the guys, staring at me in complete and total shock, and realized that I must have done something wrong. “Sorry, my father is from and there, they always kiss each other on both cheeks when greeting one another,” I said, trying to explain myself.
“I see,” she said, giggling. “I’m Emily, by the way.”
“Nice to meet you.” I smiled down at her.
Her dark-blue eyes met mine, and there was something in their depths that I didn’t know how to explain. Curiosity? Surprise? What could she be surprised about if I was just another guy out of what I was sure was no less than a dozen of her admirers?
I didn’t have a chance to ask anyone about Emily. After she left, I got back to my work, hoping no one would mention the details of our meeting in Dan’s presence.
Was she his girlfriend? I saw that look that Daniel gave me. I knew that look. It said it all — I needed to stay away from Emily, especially if I cared about my life and my job.

Author BIO:
Diana Nixon is a bestselling author of Nevermore Press. She was born in . She has a Master of Law Degree and speaks several foreign languages, including English, Spanish and Polish. Diana's writing career started with a fantasy novel, named Love Lines. For now, Diana has 11 published books, including one short story and a book of poems.
Official page: http://diananixon.blogspot.com/
Facebook: https://www.facebook.com/pages/Diana-Nixon/203165316483322?ref=hl
Twitter: https://twitter.com/DianaNixon9
Pinterest: http://www.pinterest.com/diananixon96/
Goodreads: http://www.goodreads.com/author/show/5814368.Diana_Nixon
Posted by Ottilie Weber at Saturday, December 13, 2014