Cover Reveal ~ Back in the Game Diana Nixon

I am lucky enough to be part of the cover revealing for Diana Nixon for the third installment of her series!I hope you all enjoy! It will be released one week from today! 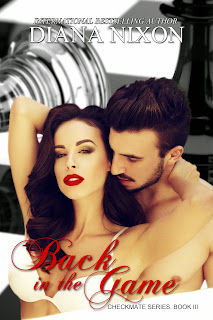 Back in the Game (Checkmate Series, Book # 3)
by DIANA NIXON
COMING JUNE 2015

Everyone knows that Aaron Blake is not the marriage type. He doesn’t do romance. He loves dirty games and women, but most of all, he loves his work. The day Josseline Altier becomes his personal assistant his priorities come crashing down, turning his well-planned life into a complete disaster. She’s uncontrollable and too self-assured for her young age. She’s not going to follow anyone’s orders, especially if they come from a man whose shameless eyes don’t miss a single chance to slide down her curves.
But one day, everything changes. One accidental picture in a morning newspaper will force Aaron and Josseline to make a decision, the consequences of which neither of them is ready to deal with.
It was supposed to be just a false romance, a pretense to spark the rumors. But nothing can stop the fire of irresistible attraction burning in their eyes.
One look, one touch, one kiss…
How far the game will go? Diana Nixon is a bestselling author of Nevermore Press. She was born in Minsk, Belarus. She has a Master of Law Degree and speaks several foreign languages, including English, Spanish and Polish. Diana's writing career started with a fantasy novel, named Love Lines. For now, Diana has 11 published books, including one short story and a book of poems.
Official page: http://diananixon.blogspot.com/
Facebook: https://www.facebook.com/pages/Diana-Nixon/203165316483322?ref=hl
Twitter: https://twitter.com/DianaNixon9
Pinterest: http://www.pinterest.com/diananixon96/
Goodreads: http://www.goodreads.com/author/show/5814368.Diana_Nixon 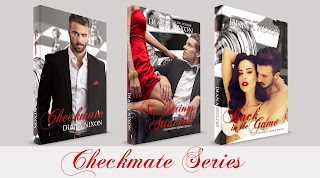 Official Page: http://inkslit.blogspot.com
Posted by Ottilie Weber at Tuesday, May 12, 2015 No comments:

New Relase ~ Whispers in the Woods

Hello!
Today marks the release of Whispers in the Woods, which is the sequel to Shadows from the Past. These two novellas are part of the Mistakes series. I take you into the world of werewolves. Whispers in the Woods does not need to be read second, but it is recommended.

Whispers in the Woods 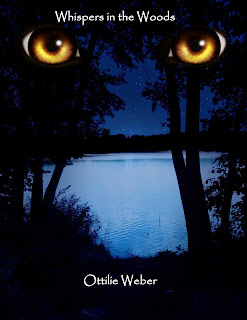 May 8, 2015
Novella
The ranks are being questioned in the shadows. No one is truly safe. Kylie is unsure of herself as she doesn't know what she wants to do with her life. However, one trip into the woods will drag her into a war.

Email ThisBlogThis!Share to TwitterShare to FacebookShare to Pinterest
Labels: mistakes, new release, sequel, Shadows from the Past, whispers in the woods

Going Rogue, coming near you?

Hello!
Awhile ago I wrote a little blog series titled Going Rogue. It was Aaron's time away during End of the Line. After it was done I put the whole thing up on Wattpad. I am considering putting it up on Smashwords so that it can be read on e-readers, but I would still make it free because well it is still on my blog. Who would pay for something that was already free on my blog? Exactly, craziness. So keep your eyes out for Going Rogue for all e-readers!

That being said just a reminder Whispers in the Woods is now available for pre-orders!
Amazon
Smashwords
BN
Posted by Ottilie Weber at Sunday, May 03, 2015 No comments: