Good Morning!
It is a Friday and it looks like the sun is trying to come to join us this morning! To all those out west I hope that you all are doing alright with all the tornados that are being thrown at you all. I can't imagine what you all are going through, we've just had warnings and that was scary enough. I do not know what is going on with all this extreme weather lately.

I'm using Grammarly on my Chrome, can you tell that I'm on my computer using it rather than my phone? I hope so! I get to share Diana's newest cover reveal. It is gorgeous and I could gush over it for a while if you let me. I'll try to contain myself. See for yourself! This is a series that I plan on catching up on this summer. I'll be in Mexico on a beach this July so I am sure that I'll get some reading done!

I hope that you're excited for the next installment in her Shattered series, so keep your eyes out for more information! 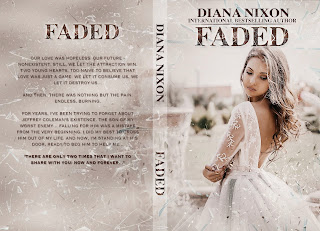 About the Author
Diana Nixon is an International bestselling author of contemporary and fantasy romances. A Master of Law, she never thought she would betray the world of law and dive into fiction. But once her first book – Love Lines – was published, she realized that writing was her true passion. Since then, she has written 20 more books. She can’t imagine her life without her fictional characters and she never stops thinking about the new storylines that haunt her dreams. She’s married and has two daughters - her biggest source of inspiration. She loves music, traveling, coffee and chocolate. She believes that writing is the best cure for everything that can be healed with words.
Diana Nixon's books are being translated into Spanish, German, Russian, French, Portuguese, Italian and Greek.

Diana Nixon is the founder of Inks and Scratches, a literary magazine intended to help authors of all genres find readers and spread the news about their writing all over the world. 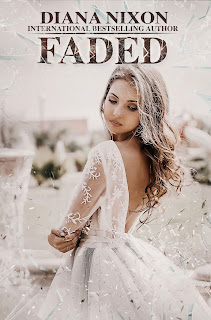 ***COMING SOON***
FADED ( Shattered Series, # 4)
Our love was hopeless. Our future - nonexistent. Still, we let the attraction win.
Two young hearts, too naive to believe that love was just a game. We let it consume us, we let it destroy us…
And then, there was nothing but the pain, endless, burning.
For years, I've been trying to forget about Jeffrey Coleman's existence. The son of my worst enemy… Falling for him was a mistake from the very beginning. I did my best to cross him out of my life. And now, I'm standing at his door, ready to beg him to help me…
"There are only two times that I want to share with you: now and forever…" 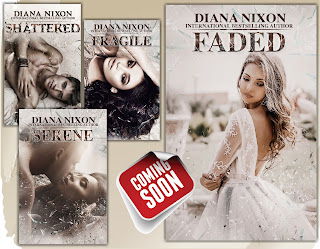 Hello!
It's a Tuesday night and we're outside enjoying this beautiful night. However l started the process of turning all of the Mistakes series into an anthology. That's right, all five stories in one spot, both in ebook format in addition to paperback! So if you've been waiting to read these werewolf story, but didn't have an ereader your chance is coming next month!

All of the stories have been edited, but I'm combing through them all again anyway just incase there is a typo or what not. I am also formatting them all to match for the paperback version. I'm hoping it'll come out nice.

However, the cover is making me over think. I love the eyes and would love to work that into the cover of the anthology since each book had it. I had a couple holding hands that I was going to use, you only see their hands. Looking at it again I don't know if I want to go in that direction. I'm going to have to play around with that. I'm up for suggestions 😁😉

As usual I'll keep you all in the loop!