Hey Lovelies!
Sorry that it has been awhile since I posted a review, but here is one, and I have a couple more to come! Here is a book that is based on a true story, Arabelle's Shadow by Fleur Gaskin: 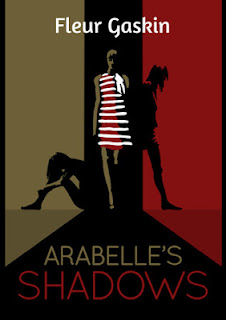 Within us there is this evil voice hoping to pull you into the deep and dark side of gloom, it feeds off misery.  Fleur Gaskin is an author who write a based on a true story about a model named Arabelle who is just struggling to not only to become famous as a model, but also just to survive. Arabelle had been battling against depression since she was little. Her home life was never good, which only grew worse as she got older. the constant yelling drove her to go travel as a model where she was traveling the world, meeting all sorts of different people that either helped quietened the evil Shadow or caused the voice to seem like it had a microphone. This is the perfect story for anyone who thinks they are alone and are in the need for hope.

For me this story was more like a three star story, however I believed because of the different style and her actual writing so that the readers who might not be able to relate are completely in Arabelle's head, feeling her pain as well. The book is told in present day and flashback from her childhood and when she is traveling more as a model, when the shadow was stronger. You can clearly tell by all the background knowledge that Fleur herself was a model, because the readers will understand how the modeling process works. I have a friend who has been battling an eating disorder for a few years now, and I had always told her that within all of us there is a deep dark voice, but it just for us to try to block it out, that it is sometimes louder for some than others. It was good to read Arabelle's Shadows to see that play out. This is a good book for anyone who is in search of the light at the end of the tunnel of struggle.

Fleur Gaskin
Fleur Gaskin is from New Zealand. She was an international model for six years, working in over ten countries, mainly in Asia and Europe. She has been in TV commercials, walked on runways and appeared in many magazines including Elle, Marie Claire and Vogue. She presently lives in Shanghai, China with her fiance