Hey Everyone,
Sorry this will not be my usual upbeatness. I thought the bad part today would be losing the top of a belly ring. My mom called me today between classes to tell me that our almost 12 year old Golden Retriever, Duchess was put down. She had a good long life I know, and when she turned 11 last year she hit the wall with her health. She had arthetist, she was blind and deaf, her kidneies were failing, and right before she died we found out she had nose cancer. 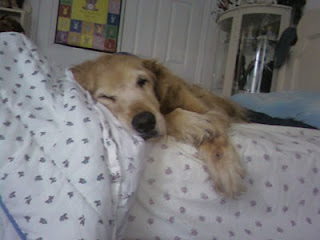 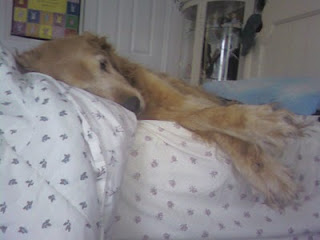 She had made herself the third child in the Weber household. We got her as a small puppy when I was nine, she was potty trained at the same time as my sister, she stole my 9 year old cousin's binkie when she was a baby, she was in halloween pictures, and was there when we brought home our two cats Maximus and Ella. Whom she never did like. She was there when I was ten and we moved from Tinton Falls to Wall. The friend I needed while I adjusted to the change. Duchess was there when my ex broke up with me and I needed someone to hug. She was our spazzy puppy. 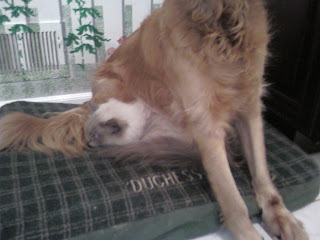 That's Maximus she's sitting on...
Duchess was a monster of a puppy. She chewed the wall off like in the scene in Marely and Me. She use to follow my grammy's 23lbs cat around the kitchen when we first got her. I can remember taking her for a walk when she was really litttle through the beginning of a heavy rainstorm which she was not happy about. She loved long walks, chasing bunnies, and stealing food. My sister once dropped a half of a cheese sandwich and it never reached the ground. Duchy loved begging for cold cuts when my mom made sandwiches. She was great with little kids and would just lay there for my really little cousins to pet her in with their baby hands. One time watching TV the characters were playing with a dog squeeky toy and she was racing around the house looking for the toy. Another time when I was dating my ex she went to him first before me. Then there was the time she was going crazy wanting food and sat on our male cat Maximus. 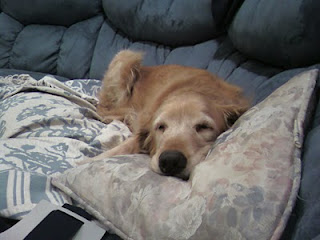 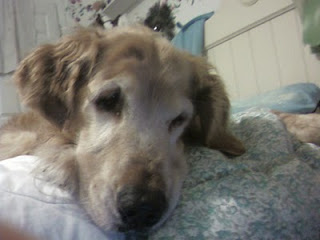 Sorry for this whole post, I just needed to vent. We always joked she was the third child in the family. She knew she was the baby and would look for my parents when we called them mommy and daddy. She would sit in my mom's office while she did work, under her desk during thunder storms. While she took up half the couch while watching TV with my dad in the basement. 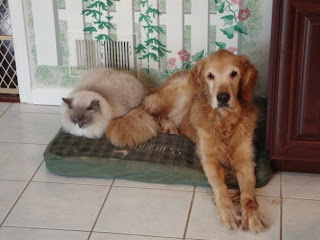 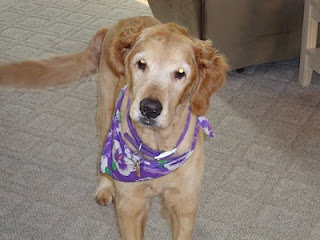