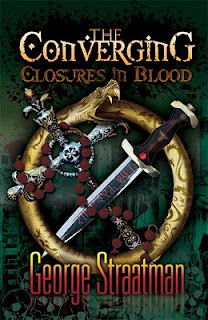 The final segment of Converging horror trilogy by George Straatman

The Converging: Closures in Blood is the concluding volume of George
Straatman’s epic Converging horror trilogy. Though rooted firmly in the horror/
supernatural thriller genre, Closures in Blood is a skilful weaving of intense action and
compelling drama that will stand as a fitting finale to this dark and richly imagined tale.
After apparently vanquishing the demon, Cynara Saravic…the now-immortal
Elizabeth Simpson returns to America to begin a desperate search for the only man she
has ever loved and the one person who can grant her absolution for the sins she has
committed while under the demon’s dark thrall. Abhorred as an abomination by both
Heaven and Hell, Elizabeth must run a deadly and insidious gauntlet to find David
Stillman, unaware that she has become the catalyst for an apocalyptic war between
good and evil. Pursued across a dying America by legions of religious fanatics and
satanic assassins, Elizabeth is forced to turn to her avowed enemy…a dark mistress
who represents her only hope of eluding her relentless pursuers and finding some
sense of closure to the dark nightmare of her life…and a hope of personal redemption.
Populated by a cast of dark and richly detailed characters, Closures in Blood is a frenetic
rollercoaster ride into darkest depths of the Converging universe…a place where the vile
and the righteous will find a grim measure or resolution in the explosive conclusion to
this master work of dark horror.

QUESTIONS & ANSWERS FOR CLOSURE IN BLOOD

What are the primary themes of this final segment?

As the title would imply, the novel’s plot revolves around putting a measure of
closure to the story elements that have bridged the trilogy. By the conclusion
of this novel, all of the primary characters who have populated the world of the
Converging will have found a sense of resolution by the novel’s closing page.
In addition to this, the story deals with the protagonist’s search for personal
redemption and atonement for her culpability in Cynara Saravic’s twisted tapestry
of evil.

Is there one common theme that ties the three segments of the trilogy
together?

This is first and foremost, a horror trilogy and its roots are fixed deep in the dark
soil of the supernatural thriller genre, but really, the story transcends the genre
to become more of an intense drama about one woman’s thirty-five years search
for a degree of normalcy after the foundations of her life have been eradicated by
cataclysm events. Elizabeth’s painful and often tragic journey is really a metaphor
for perseverance and a sustained belief in the compelling power of hope. The
horror elements merely serve as a vehicle through which this story is told.

How long did it take to complete the full Converging cycle?

The full cycle took twenty-five years to write from the first moment I took up a
pen and began the first page of the original novel until the moment I decided that I
was happy with the end product of Closures in Blood. The characters of the story
become constant companions of sorts…who I’ve come to care about and develop
an emotional attachment to.

The first two novels were characterized by intense and dark horror…that
could often be considered disturbing…does this atmosphere prevail in the
final installment?

Most definitely…I’ve attempted to infuse the novel with a pervasive sense of
desperation in which Elizabeth’s search for David Stillman is undertaken against
a frenetic background of terror and incessant pursuit. The central concept of the
Converging has always been about a wide array of forces coming together at one
juncture in time with catastrophic results and Closures in Blood is fraught with
this element. I wanted the story to unfold like an avalanche…or more correctly,
a convergence of avalanches…all coming together with a brutally violent
finality. Every character in this novel is much like a piece of an intricate jigsaw
puzzle…the commonality of each of these pieces is Elizabeth Simpson, who
serves as the lens through which they are all focused…with extremely explosive
results. This novel certainly serves up the most diverse collection of characters of
the series…and this diversity adds to the volatility of the plot.

Was there a single facet of this story that would stand out as the most
difficult to write?

The segment of the story that dealt with the teenage runaway, Cassandra Jasic
was perhaps one of the most difficult that I’ve ever written…the scene in
which she reveals the story of the abuse she suffered as a child was difficult to
write…and equally difficult to read. Ultimately, horror is an emotional response
and Cassandra Jasic’s hellish ordeal goes a long way toward justifying the depth
of psychosis she demonstrates in the story. The tone of segments such as this
one is critical…an author has to be attuned to the need for presenting this type
of material in a way that does not make it gratuitous or even worse…appears to
condone the actions being depicted.

With the conclusion of this series, is there any one character with whom you
feel most connected?

Though I’ve enjoyed all of my characters immensely and feel a strong affinity for
each, I would say that Elizabeth Simpson is the individual for whom I have the
most empathy…I often reflect on the things that she endured over the course of
the three novels and I’m suffused by a profound sense of sadness. Cynara Saravic
presented me with the most perplexing technical challenges as a character, but

Elizabeth Simpson is the one who resonates emotionally through the trilogy…her
closure is, for me, the most emotionally poignant.

Are the any specific moral concepts contained within this final novel?

It would be difficult to write a two thousand page story without inculcating some
personal philosophy into the fabric of the story…The story is violent and bloody,
but beneath this, there resonates a subtle judgment on the nature of this violence.
The story also holds an implied statement on the nature of seduction and the way
that an individual’s personal prejudices can ensnare them into accepting things
that both dangerous and illogical. This subtext is most clearly demonstrated by
the characters of Gregor Ingram and Contayza Prowzi, whose inherent prejudices
allow them to be deceived into seeing Elizabeth Simpson as the ultimate
manifestation of evil.
Elizabeth Simpson takes center stage in this novel and it is through her that
I have implicitly conveyed my own personal view on violence and moral
integrity…Through all of her travails and loss, Elizabeth retains an inviolable
sense of dignity and grace and vehemently refuses to succumb to the more primal
urges that drive many of the novel’s other characters…she comes closest to
representing my own perspective on the treatment of violence in art.

With the conclusion of the trilogy…have we seen the last of Elizabeth and
Cynara?

As mentioned earlier…this cycle had a twenty-five year creative life. In that time,
I have transitioned from a horror novelist to a fantasy novelist…a genre with the
broadest creative potential. Still, it would be impossible to invest so much creative
and emotional energy into characters such as Cynara and Elizabeth and not have a
strong bond with both. The Converging as a concept has definitely run its course,
but I have tinkered with the idea of writing a novel that tells the story of the
demon Cynara Saravic and her life through the years between her disappearance
in 1850 to her appearance in the fictitious town where the first novel takes place
in the 1970s. As for the trilogy’s primary protagonist, Elizabeth Simpson, I have
developed a plot outline for a novel that would take place some years after the
events chronicled in the epilogue of Closures in Blood. Both of these notions are
in the formative stages and whether they will germinate into full novels, only time
will tell. My primary focus over the next few years will be on development of my
fantasy cycle – Journey through the Land of Shades.

Finally, here is a direct connection to my sales page on Sony

The trilogy is also available on Kobo, Barnes & Noble, Apple and Smashwords

he can be contacted through Facebook under George Straatman

he can be contacted via e-mail @ geolouicewind@yahoo.ca
Posted by Ottilie Weber at Thursday, March 10, 2011